It may interest you to know that the good people of Catalonia actually have their own tartan. Commissioned by Catalans in Edinburgh the Catalunya Escocia tartan is registered no. 11163 on the Scottish Register of Tartans. The colours are based on the ‘Estelada’, the flag of the independence movement in Catalonia.

It was launched at a fashion show in Glasgow, the occasion being the ‘Football Fashionistas’ fashion show at the second Tartan & Turban Burns Supper at the Thistle Hotel in aid of ‘Show Racism the Red Card.’ It represented Barcelona.

The event was organised by the Sikh community in the West of Scotland and compered by Hardeep Sing Kholi. His fee was a kilt in the Spirit of India tartan. 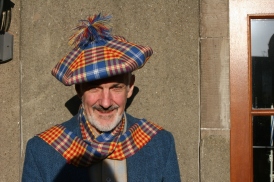